It’s hard to believe that we’ve been away for over a week already! Since I left you, we departed from our orientation in Washington DC (which was awesome!) and set off on a 25+ hour excursion to the first stop on our American Music Abroad Tour, MALAYSIA!!! What an amazingly beautiful country this is. Everything from the cultures, architecture, dress, food, and most importantly the people that bring all of the prior to life… are spectacular.

Our first stop was the impressive city of Kuala Lumpur, more commonly referred to as “KL”. Here in KL, we had a whirlwind of a time. In the span of less than 24 hours we were privileged enough to workshop an amazing group of gentlemen at the International School of Kuala Lumpur, had a fun interview on Lite FM’s The Breakfast Show, and then put on a full public performance open to the public at the beautiful Malaysia Tourism Center (MaTiC). During the performance at the MaTiC, we were honored to share the stage with talented students of the Malaysia Institute of Art Ladies & Men’s Chorus. In addition to their beautiful set of music that they performed to kick the evening off, they went above and beyond and learned the extended choral arrangement of our Happy Medley, which they performed live on stage with us to close out the concert! Their energy, sound, and professionalism brought the performance of that song to a whole new level! Thank you all so much for learning it and sharing your beautiful songs with us!

To close out this whirlwind of a first day, we were graced with the presence of Tunku Al-Abidin. Tunku Al-Abidin is the second son of the reigning Yang di-Pertuan Besar who rules over the Malaysian State of Negeri Sembilan.  Tunku ‘Abdidin is such a big advocate of the arts here in in Malaysia and is [himself] a very accomplished pianist. He’s a patron for the Euroasia Association of Performing Arts and regularly supports the organizations efforts to develop and share music education and performance. Aside from all of that weight that he carries with him, he was such a down to earth and kindhearted individual. We were sad to say that we didn’t get to spend more time with him and hear him shred on the piano! Maybe next time :: wink wink ::. 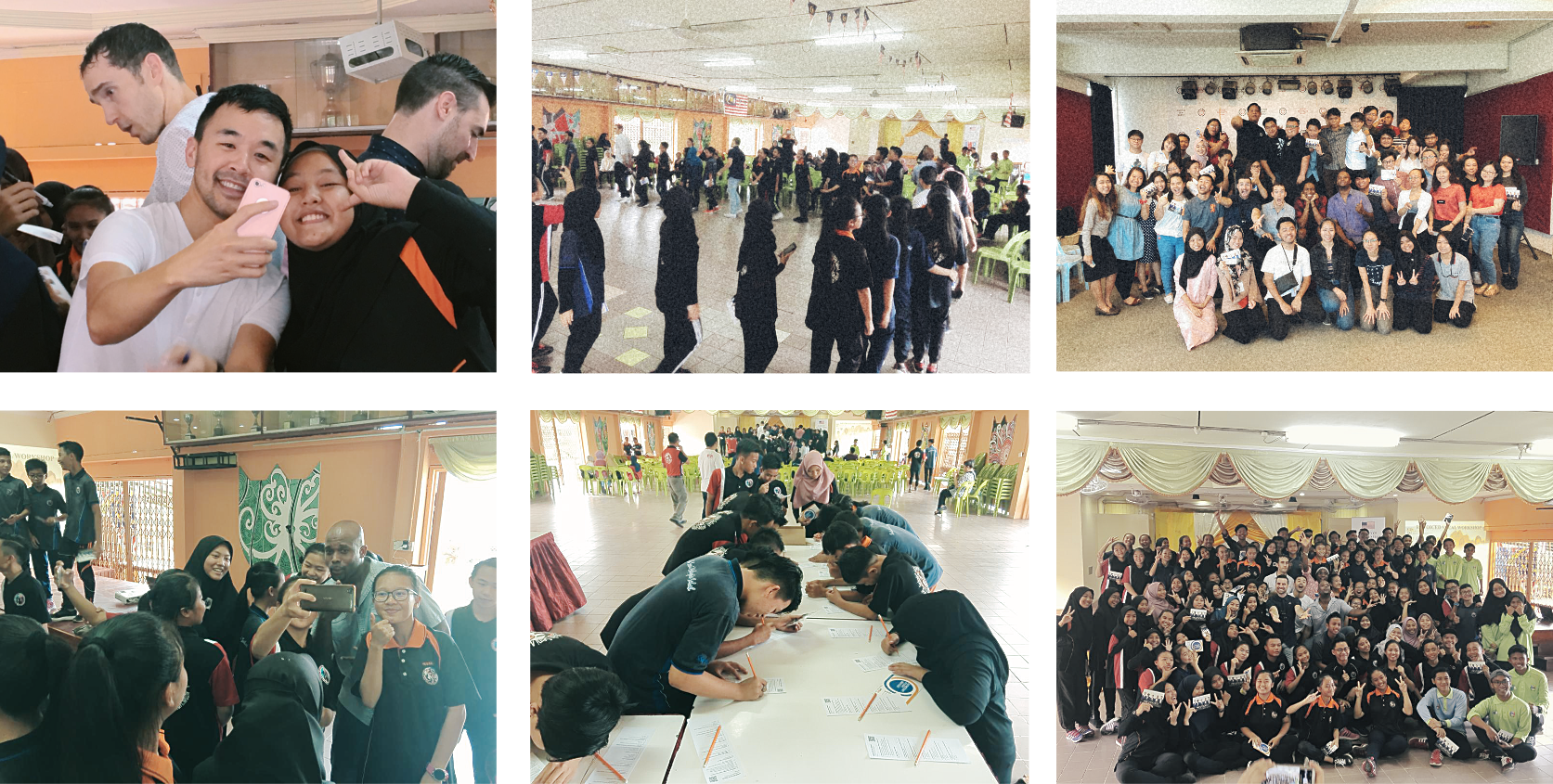 After hurricane REVOICED took KL by storm, we moved northeast to the city of Sandakan, which is located in the Malaysian state of Sabah and located on the northeast coast of Borneo. Once off the plane, we “B-lined it” towards the Bornean Sun Bear Conservation Centre where we had a once in a lifetime workshop with a small but lively group of local students in the middle of the jungle with sun bears roaring off in the distance… literally! I felt like I was in Jurassic Park. The conservation centre was so beautiful and also offered refuge to many other animals like cute baby elephants that weren’t so “baby-sized” and there were also a few Organutang’s just roaming the grounds like they owned the joint. One looked like he was going to see if he had any mail. I think he was expecting a delivery from Amazon! :: drum hit :: After hanging out with the students at the center, we went out to dinner with some amazing individuals where we shared countless laughs and inquired about each other’s lives. The food we shared was family style and (at my first bite) was so spicy that it sent me into an uncontrollable fit of coughing, which was cause for concern for everyone at my table but alas, I prevailed.

Day two in Sandakan was an unbelievably special one. We had a hugely impactful workshop with the amazing students at Elopura National Secondary School however, I think the people that were impacted the most were the five of us. After we finished the workshop an impromptu beat box jam session broke out with Chesney and two student beat boxers and they were INSANELY good! So good that we brought up on stage at our evening performance to jam again and they gave Chesney a run for his money! Among the beat box jam, dancing and singing turned up! The students eagerly grabbed the rest of us and had us dancing and singing with them to an awesome song called Original Sabahan, which is a song about being a proud Sabahan. This simple gesture made us feel so welcome and loved, I can’t even begin to convey it.

At our performance later that night, we teamed up with an incredible local finger-style guitarist named Cris Aban. This guy… when he plays the guitar, it’s like he has fifteen fingers! Such amazing control over his instrument and is an incredible musician all around. We were so thrilled that he wanted to join us on some of our songs that evening. Having him on stage marked the first time that REVOICED collaborated with an instrumentalist live and it was so wonderful to look over and see a new face jamming on stage with us! He is such a kind, humble, and genuine person and it felt like we knew each other for a few years. We were sad that we didn’t get more time to hang out with him, though. Hopefully we get the opportunity to perform together again in the future. Thank you so much Cris and much love to you, brother!

A short flight from Sandakan brought us back west a touch to the vibrant city of Kota Kinabalu (aka KK). KK has such an “island” feel to it, not unlike that of Hawaii. I had some of the freshest seafood of my life here at the fish market where you pick out the food you want and they cook it right there. All of that food was freshly caught just hours prior and it was something unlike anything else I’ve ever experienced.

Our last day in Malaysia was another jam-packed day. We met with the students at the Sabah Institute of Art where students are free to explore a wide array of art, design, and music courses, which offered us the ability to talk more in depth beyond “what” we do and more along the lines of “how” we make it all happen. We were also able to continue that conversation at our radio interview with our gurl Gee at 89.5 KK12FM. This woman can SING!!! She sang with us on My Girl and blew us all away! We then proceeded into the studio where we dove into some terrific discussion about making a difference in peoples lives and the world of today with what is is that we do. Gee, despite hosting her radio show called “Tick Talk with Gee”, found time to see us a bunch that day and also made it to our full show later that night at the beautiful National Department of Culture and Arts venue, which was a bumpin’ show! 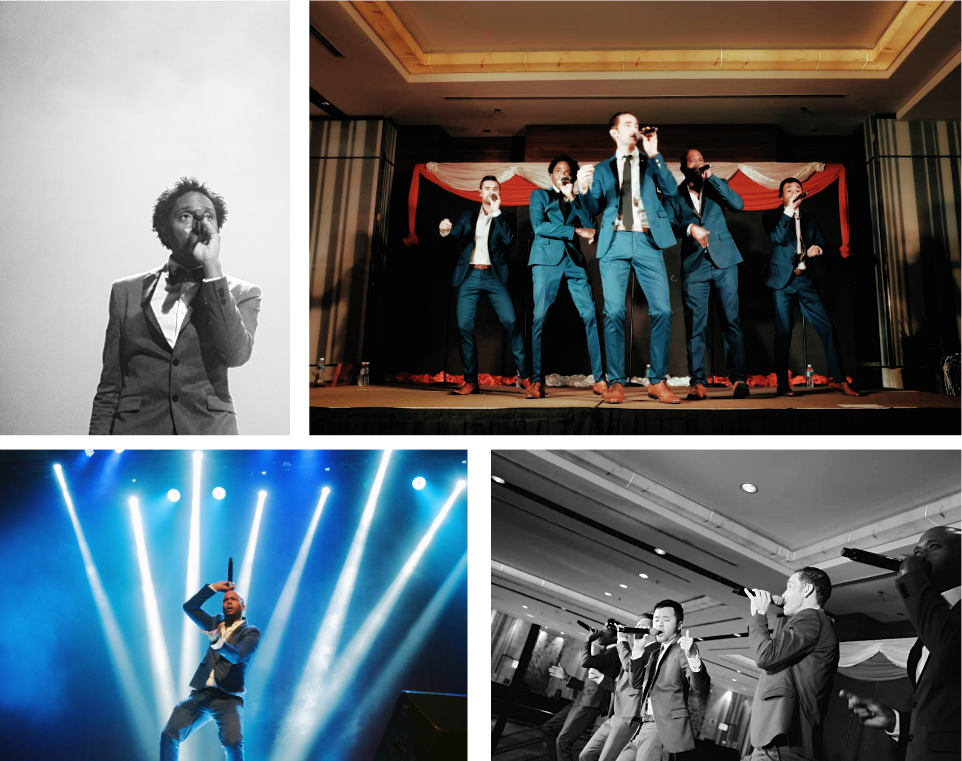 This was our last show in Malaysia and the audience was loud, raucous, and clamoring for more throughout the entire experience. We surprised the KK audience by bringing up Esther Applunius, a renowned local artist to perform with us for two numbers and Esther brought it to a whole new level. She blew us all away with her vocal talents so much so that it distracted us all from what we needed to be singing! She was an absolute angel to work with and we are so grateful that she made some time to share the stage with us.

Our time in Malaysia was brought to a beautiful close by a gentleman who was in the audience that night. After the show, he waited patiently among the relentless horde of REVOICED fans that were bombarding us all and when there was a break in the chaos he calmly came over to me and said that through our one hour show that evening we managed to bring “Malaysia and the United States closer together in friendship than ever before.” That statement alone brought a huge smile to my heart and made it the perfect ending to our first time in this amazing country.

Next week, our part one of time in Indonesia!

Shout out to Dream Team Malaysia seen below : Shanon, Michael, John, Dela, Kai… Thank you all so much for everything! You’re all amazing and we can’t wait to work with you again! 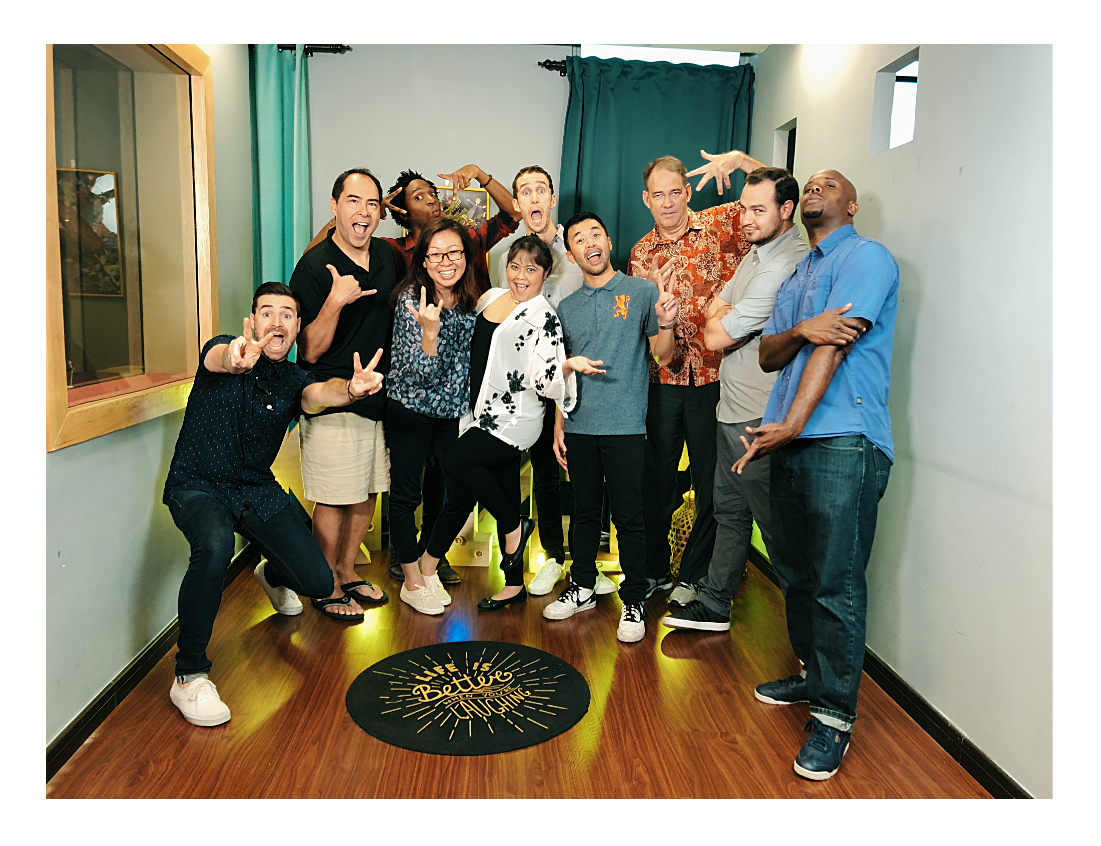