Sorry for the delay! Ever since we got back from Southeast Asia, we’ve been going non-stop. We’ve been on the Royal Caribbean Adventure of the Seas and the Freedom of the Seas, the Celebrity Silhouette, had a show in Boyton Beach, Florida, recording sessions and rehearsals for our upcoming Christmas Album and holiday show, and much more! So, needless to say it’s been hard for me to find some downtime to write about our last part of the trip, which was jam-packed full awesome times! So let’s pick up from where I left off!

Last, but certainly not least, was our insane last two days of tour in the incredible city of Palembang, the capital city of the South Sumatera province in Indonesia. The amazing thing about Palembang was that they just finished hosting (along with the city of Jakarta) the 2018 Asian Games so the area was still heavily decorated with all of the branding of the games. These games, also known as “Asiad”, are organized every 4 years by the Olympic Council of Asia and are Asia’s “biggest multi-sport games after the Olympic Games”. This year, Indonesia was honored with hosting! I just wish our trip was a few weeks earlier so that we could have seen some of the events.

Upon landing in Palembang, we met our team leader Caroline. Caroline was the planner and REVOICED “wrangler” for our time in Palembang. Our dear, sweet Caroline. She is so adorably kind and without a doubt an angel sent from heaven. However, she didn’t hesitate to whip us into shape. She straight up broke us like wild horses with the schedule that she planned for us while in Palembang. Caroline had our last 2 days of tour packed full of performances, interviews, and meet and greets. All of which were so much fun but soooo tiring. 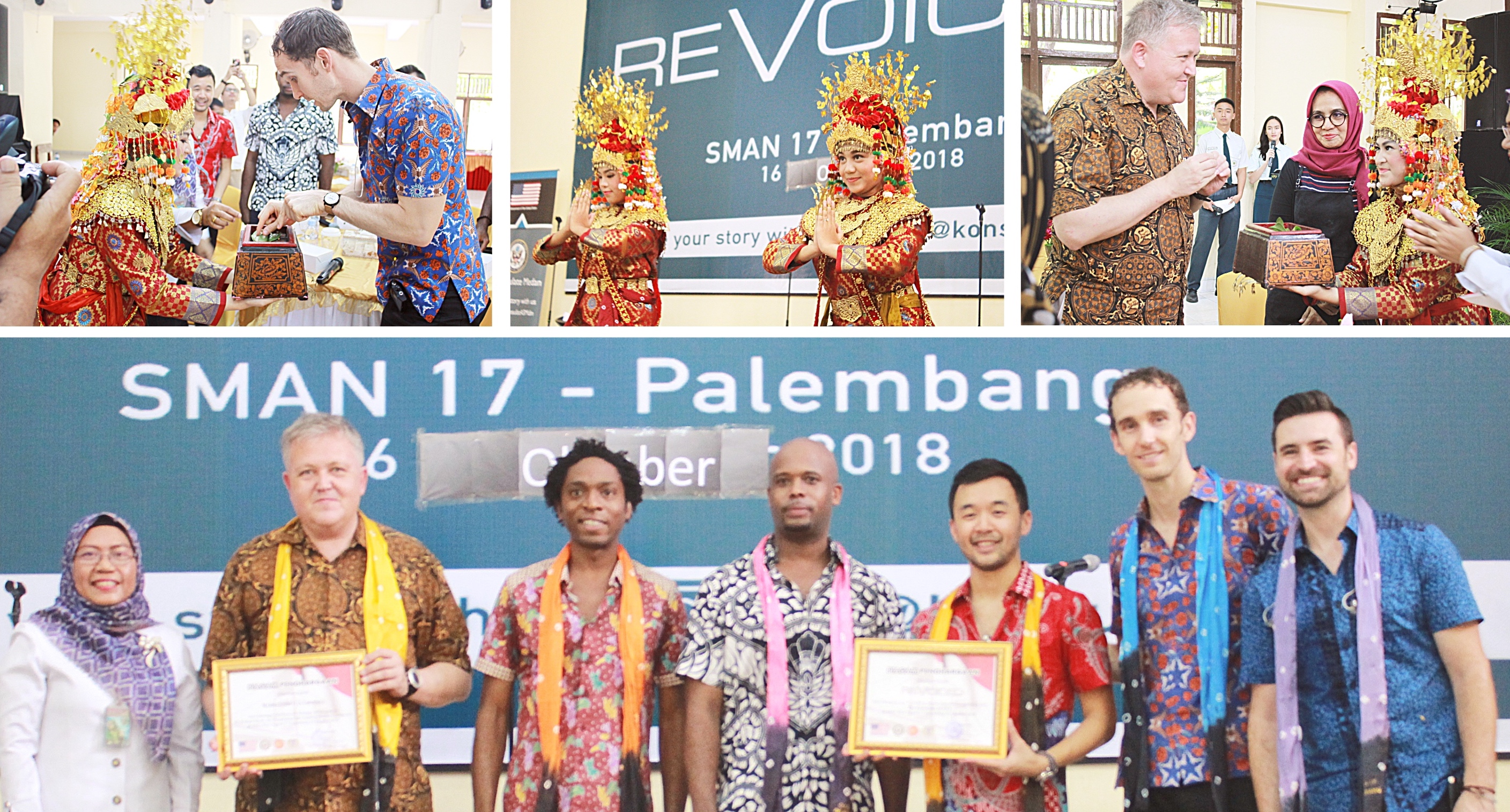 To kick it off, we met the amazing students and faculty of Public High School 17 (SMAN 17) in Palembang. We were welcomed via beautiful opening remarks and an amazingly gorgeous opening ceremony with a traditional dance called Tepak Keraton. The outfits worn during the dance were so ornate and outright beautiful and makes me wish that we had similar traditions like this back in the States. In the midst of the ceremony, we were offered Sirih (betel leaves) that are traditionally presented when greeting and welcoming guests. While we all took them, we didn’t eat them because we were told that they numb your mouth, which would have made for a very interesting first “vocal showing”. Although it would have been extremely funny for sure!

After a fun and raucous performance at SMAN 17, we headed to get some lunch with our “embassy ground unit” at a local restaurant and then right after, we had a press conference with local reporters and journalists. We all forced Mark to talk the whole time because our voices were tired and we like throwing Mark under the bus sometimes… but only because we love him.

After the interview, we then booked it to Universitas Sriwijaya where we loaded in and began preparing for our second full performance of the day. Before our evening performance commenced, we were thrilled to receive more stunning performances from their traditional dancers as well as their Belissario Choir. Both of which were fantastic and blew us away with their professionalism and precision. If we learned anything that day, it was that the people of Indonesia are extremely proud and eager to welcome newcomers into their lives by sharing their culture. This theme would carry over into our next day as well.

Caroline was cracking the whip bright and early today at 6:30am and making sure that we were en route to meet everyone at the Aulia Cendika Islamic Boarding School. When we arrived, about 300-400 students and faculty were all patiently awaiting our arrival. Never in a million years would I think that so many people would be excited to see something that I’m a part of but these students were absolutely nuts for REVOICED, and we hadn’t even sung anything yet. Even while walking into the venue, there were barricades needed so that people didn’t knock us all over. It was weird because a part of me loved it but the introverted part of me was kind of overwhelmed and nervous while it was going on. Overall, it was craziness but after we got set up and the open ceremonies began, things began to settle down a bit. However, when we took the stage, the kids went nuts and turned back up to 11. They were screaming so loud that even with my in-ear monitors all the way in, I could still hear the students screaming as if they were shouting directly into my ears. They were so enthralled with Chesney’s vocal drumming that they had a hard time containing their screams while Chesney was trying to get the audience drumming with him.

Upon our return to the hotel for some down time, that’s when the travel started getting to some of the guys. Chesney and Mark fell a little under the weather and struggled to get through the last performance. Well, Chesney more-so than Mark but both were pros and powered through our last performance at the Icon Mall. This was a really cool performance because it was almost like performing “in the round”, which is something I’ve wanted to do for so long. There is this cool performing arts venue on Long Island (where I’m from) where many popular names have performed and it happens to be a circular stage with the audience seated all around the whole stage. The stage also rotates during the performances so everyone can get to see the artist to do their thing up close. I’ve always wanted to perform in a venue like this. Our performance wasn’t exactly in a round venue but there were people all around the stage on the floor level but there were also countless other people looking down and watching from several other levels above us. It was so cool to see people watching you do what you love to do from every direction possible. Seeing the audience and happy faces surrounding us fueled our energy that night on stage. While being in the middle of a shopping mall, it was weirdly intimate and personable, which was a great way to end our time overseas in Southeast Asia.

After our performance, we were surrounded by hordes of fans waiting eagerly to take selfies and sign their pictures of REVOICED. It was so amazing to feel such warmth, love, and kindness from total strangers. I ended up staying a while talking with new friends and fans after the show because I knew that as soon as I went back to the dressing room, it was all going to be over. As quickly as we arrived, we were then forced to pack up our equipment and bring it all to a close. We went out for a post show/tour dinner with Caroline and the rest of the crew and just reveled in the crazy-awesomeness that was the last few weeks abroad.

After some amazing food with newfound friends that will for sure last a lifetime, we headed back to our hotel and got ready for another 24+ hours of travel back to the United States. And just like that… it was all over.

Stay tuned for the post tour wrap-up where you’ll get to hear from some of the other guys aside from me!